Mixing Adderall and Weed: Is it Safe?

Adderall has many legitimate medical uses. However, as is the case with most prescription drugs, the potential for abuse exists.  Further, it is possible for it to become part of an unhealthy habit or addiction. Marijuana, or weed, is a psychoactive drug that has very different effects on the brain and body. While both substances have some beneficial medical uses, they can have harmful effects when mixed together.

Adderall is the brand name for a combination of two drugs, amphetamine and dextroamphetamine. Frequently, prescriptions are for individuals who have Attention-deficit/hyperactivity disorder or ADHD. Adderall is quite effective with improvement in symptoms in 75 to 80 percent of patients. However, it is oftentimes prescribed to individuals who are not clinically diagnosed with ADHD as a quick fix for inattentiveness.

Adderall is a central nervous system stimulant. It increases the availability of neurotransmitters, which can increase the speed at which your brain is able to process and complete tasks. This is why adderall can be popular amongst college students who abuse the drug in order to get assignments completed quickly.

Adderall has several common side effects: 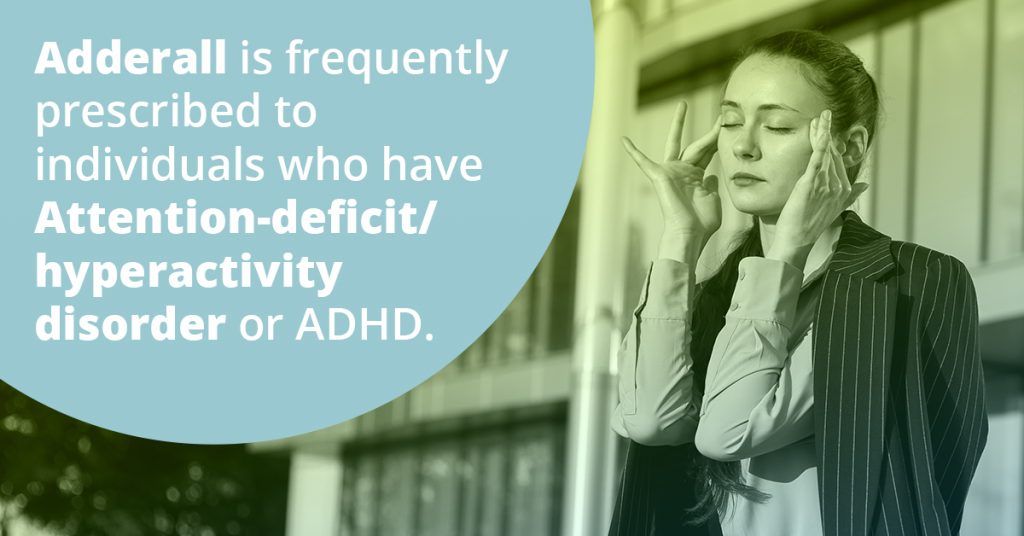 Marijuana, or weed, is a drug derived from the dried up flowers of the cannabis plant. It is considered a psychotropic drug which has been heavily researched for its medical properties. However, it still remains a schedule I drug as per the Drug Enforcement Agency, DEA, which means it has no federally identified medicinal properties and has a high potential for abuse.

Marijuana is hard to classify into the traditional categories of stimulant, depressant or hallucinogen because its effects can fit into all three categories. It has a slightly different effect on every person who consumes it. Some people claim that it calms them down in the same way a depressant would. Others get a burst of energy and sometimes anger, aggression or paranoia from it, which are typical effects of stimulants.

The reason for its popularity is due to the intense highs most people experience while using the drug. It is also popular for its natural pain-killing abilities. Given that it is a psychotropic, it will alter perceptions of reality to some degree, which many people enjoy. However, it does have a potential to be addictive.

Adderall has the potential to be highly addictive. It increases the quantity of norepinephrine and dopamine levels in the brain. Norepinephrine is a neurotransmitter which increases the brain’s response to events and its ability to stay focused on it – which is why adderall is quite effective for ADHD. Dopamine is the brain’s reward chemical that releases when we engage in pleasurable acts. The dopamine surge you get from adderall can create a link between your brain and taking the medication, which can leave you with cravings for that feeling.

Adderall is usually used to increase work productivity. With regular use over time, however, the brain will require it in order to feel like it is functioning properly and effectively. This desire to function at high levels is what usually leads people to develop an addiction.

Adderall contains amphetamines, which are the base chemical of methamphetamine. Surprisingly, the two drugs share more similarities than differences. They both work on the brain in almost identical ways. However, it is very obvious that meth is much more potent and dangerous. Meth is able to transcend the blood-brain barrier more quickly than adderall, making it more potent over a shorter period of time. Further, it has a much higher potential for addiction, given the powerful highs it creates and large amounts of dopamine it releases.

So while there is no simple ‘yes’ or ‘no’ answer, comparing adderall to meth may not be accurate even though they are chemically very similar. 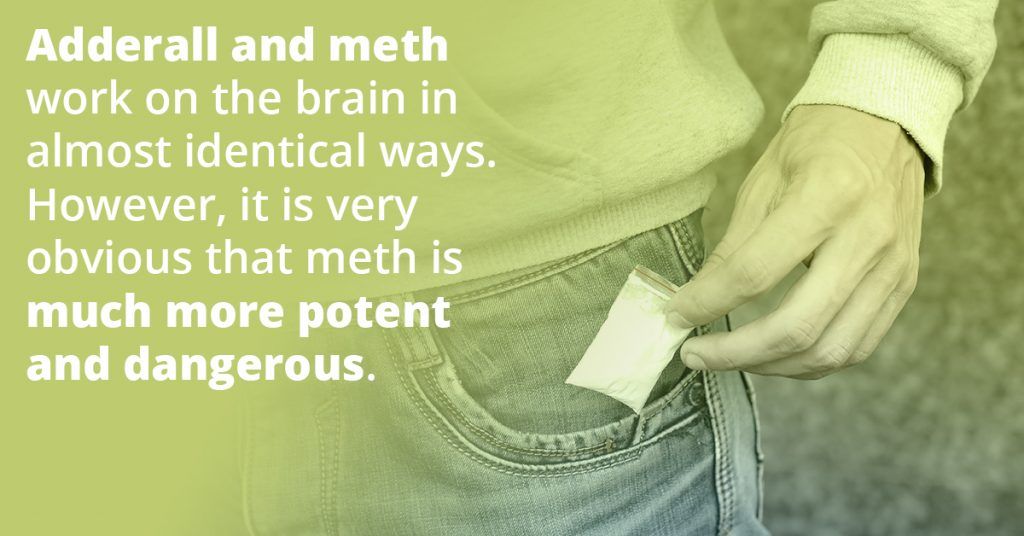 You can overdose on adderall, and it is becoming increasingly common.  Most people associate overdosing with depressants such as alcohol or opiates. A stimulant overdose is very different. It happens as the result of overstimulation of the parasympathetic nervous system. At a certain level of intensity, these smptoms can be fatal. Signs of an adderall overdose include:

If you think you or someone around you is experiencing an adderall overdose, it is important not to ignore it. Call emergency services immediately to let medical proffessionals assess the level of danger.

How Long Does Adderall Stay in Your System?

Adderall has a half-life of 9-11 hours, which means it will take approximately that amount of time for the ingested dose to reduce to half its size. Given its half-life, adderall will be detectable in your body up to 3 days after last use. Hair follicle tests may detect it much longer after that but it is not a very common test.

What Happens When You Mix Adderall and Weed?

Because the two drugs can have opposing effects, some people use them together recreationally. This is a form of polysubstance abuse, which is the mixing of any two drugs or medications without medical guidance.

It is difficult to estimate the effects of mixing two or more drugs from different categories. Currently, there is no official scientific research that accurately states possible effects of mixing Adderall and weed. One certainty is that the danger of engaging in risky activities will increase when under the influence of both drugs. While the effects of using them together are not certain, driving under the influence of both substances is not a good idea. Legal ramifications vary from state to state. Overall, given that marijuana has unpredictable effects on people, it makes the task of predicting effects and outcomes exponentially difficult.

Additionally, adderall and marijuana have both been shown to impair cognitive abilities over long-term use or abuse. In the short-term, using weed to balance out adderall’s negative side effects may actually lead to someone taking more of it, thus increasing the chances of an accidental overdose.

Adderall and weed are two drugs which are not often seen as addictive substances. Unfortunately, given their seemingly harmless nature, the chances of unknowingly becoming addicted is higher. Addiction is treatable with the right guidance, and recovery has much higher rates of success with professional rehabilitation and therapy. If you or a loved one are in need of treatment, please contact us today.