Put simply, physical dependence is most easily identified in someone experiencing either or both:

This can happen with something as innocuous as coffee: If a person has been drinking coffee regularly, they are likely to experience mild withdrawal symptoms, such as headache, irritability, and fatigue if they suddenly stop consuming it.

Addiction, on the other hand, denotes a type of compulsive, chronic, physiological or psychological need or disorder characterized by an inability to stop using a substance, despite the harmful consequences.

Knowing the differences between these two conditions is important in identifying whether someone needs help overcoming a substance use disorder (SUD). 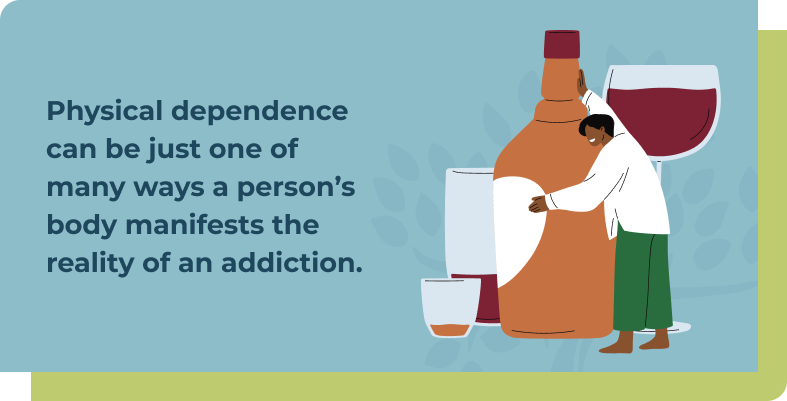 So What is Addiction, Exactly?

In a general sense, an addiction is a need or compulsion to keep using a substance, or doing an activity. Addictions can be to a drug or a medication, but they can also include behavioral addictions, like an addiction to gambling or sex.

Things that tend to be addictive have some type of positive effect when taken. For instance, nicotine causes a short rush of feel-good chemicals. This makes repeated uses more likely as the brain also starts to associate nicotine with feeling good, due to the release of dopamine.

At a certain point, this cycle of use and release of good feelings encouraging more use can develop into an addiction. The same can happen with other drugs or activities that cause the release of dopamine.

When Does Regular Use Become Addiction?

The exact point where misuse or continued use becomes addiction can be difficult to pinpoint. Some addictions develop over time while other substances are powerful enough to trigger addiction at first use.

A person addicted to a substance will experience intense cravings for the drug, and become hyper-focused on only the goal of obtaining more.

These cravings aren’t always obvious, but they are always present, and may become debilitating, causing problems within that person’s social life, work, and financial situation. Even if a person knows that their substance habit is causing problems with their health and life, the disordered nature of addiction does not allow them to stop voluntarily. 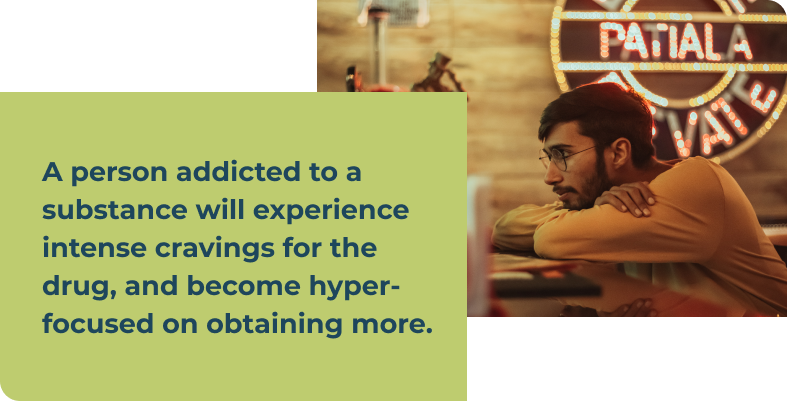 How Does Physical Dependence Impact Addiction?

When someone is struggling with an addiction to a substance, they are also physically addicted to it. Physical dependence is what leads to the withdrawal symptoms that a person experiences when they try to detox from an addiction.

After taking a substance for a while, the body grows accustomed to having it as part of its regular functioning. This built-up tolerance makes the effects of the drug itself grow weaker over time, but it also causes issues if the substance is suddenly stopped.

If a person’s body has grown “used to” the substance, and then it suddenly isn’t there, the body reacts by trying to rebalance itself, leading to withdrawal symptoms.

Why Does Physical Dependence Develop?

Physical dependence happens as a result of a combination of the body’s homeostasis process and repeated use of a substance or medication.

Without any outside interference, the body is constantly trying to maintain a balance of temperature, hormones, body fluids, and more. This is what’s known as homeostasis.

When someone starts taking a substance, it often interferes with this balance. In some cases, this is a desirable thing. An example of this would be that, for those who suffer from depression or anxiety, the upset of the body’s natural “balance” from medication can mean a reprieve from the symptoms of their mental illness.

Over time, however, the body becomes accustomed to the presence of the medication or drug. Eventually, the body reaches a point where it has adjusted its homeostasis state to include the substance.

What Are The Withdrawal Symptoms of Physical Dependence? 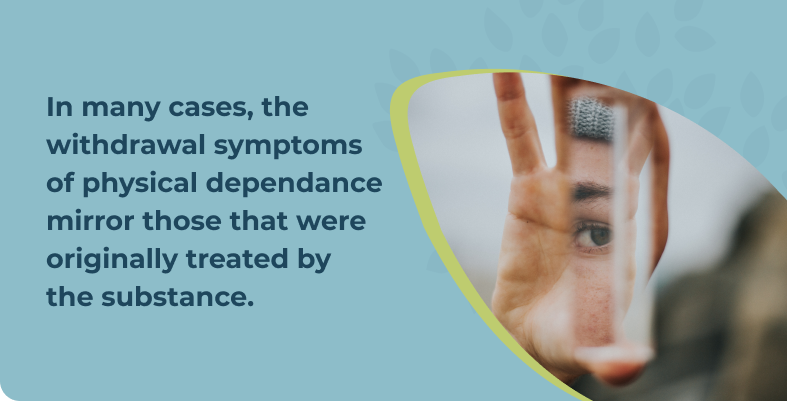 Physical dependence and addiction are closely intertwined, and the former is almost always present in cases of the latter.

It is important to know the distinction. Physical dependence can involve uncomfortable withdrawal symptoms, while addiction can be incredibly difficult to overcome. If you think you or a loved one is struggling with a substance addiction contact us today.