Cultural attitudes around substances shift over time, something that often depends on our understanding of substances and how they affect people. Additionally, the way substances are shown in popular culture like music, film or television, and other forms of art has a significant impact. Alcohol, for example, is a drug that is widely socially acceptable. Many people are able to consume alcohol safely and smartly, but it is also a highly addictive substance. Further, the negative effects are numerous and quick to appear regardless of prior history.

Much of pop culture involves depictions or references to alcohol, with few often showing the seriousness of alcohol misuse, abuse and addiction. Similarly, cough syrup is frequently referenced particularly in the context of partying. While kratom is not as widely referenced or known at this point, it is a substance that many are beginning to use and mix with other substances like DXM. Regardless of legality, mixing DXM and kratom presents a number of risks.

Kratom is the common name for mitragyna speciosa, a tropical evergreen tree in the coffee family that is native to Southeast Asia. At this time, kratom is becoming more common in the United States,  but there is currently no nationwide ban or enforcement. It is possible to buy online or in certain stores, like gas stations. The states where it is illegal include Wisconsin, Indiana, Arkansas, Alabama, Vermont, Rhode Island, and Tennessee.

The leaves of kratom involve a chemical that causes a psychotropic (mind-altering) effect. It has effects that are similar to both opioids and stimulants. Some use it to help with withdrawal from other drugs, though this is not medically supervised or approved. As kratom is a newer substance in use, there is not a lot of official literature on abuse and addiction. However, similar to drugs with opioid-like effects, there is the possibility to develop dependence and experience some physical withdrawal symptoms when stopping use.

Between 2011-2017, there were 11 deaths associated with kratom exposure and of these 9 involved other substances. As with many substances, they do not always cause overdose on their own, but mixing substances increases the risk significantly. In high enough doses, a sedative effect can occur which is particularly dangerous when mixed with other sedatives.

Negative side effects potentially include:

DXM, or dextromethorphan, is an over-the-counter (OTC) cough and cold medicine. It is a derivative from morphine, a much more powerful opioid. It does not provide the same painkilling effects of an opioid, but it does help suppress coughs. Further, the sedative effects help sick individuals relax to aid in falling asleep. In high doses, it is possible to experience a euphoric high, which is why many abuse it. As an OTC drug, it is easy for many people to buy DXM at various stores. However, there are often age restrictions that vary from state to state. The more one consumes DXM, the higher the risk of negative side effects.

When taken appropriately, DXM works to treat a cough or cold. With increased intake, the risk of serious side effects increase and the possibility of overdose as well. As a suppressant, it has the potential to cause slower breathing and slow down other critical organ functions.

Often people mix substances to enhance the effects of different drugs or even counteract the negative effects. With a high enough consumption, DXM provides a euphoric high but it also has suppressive effects. Some will then mix with something like kratom, which has some effects like a stimulant, wanting to experience what they think is the best of both. However, mixing drugs also enhances the negative effects. Mixing two substances that have sedative effects is incredibly dangerous and as sedatives slow breathing and brain function, the risk of serious overdose and death is a very real possibility. The more a person misuses and abuses a drug, the higher the possibility of dependence and addiction. Additionally, if a person experiences withdrawal, it is more severe with significant misuse and abuse. Mixing DXM and kratom might seem harmless, but everyone should understand mixing substances is never harmless. 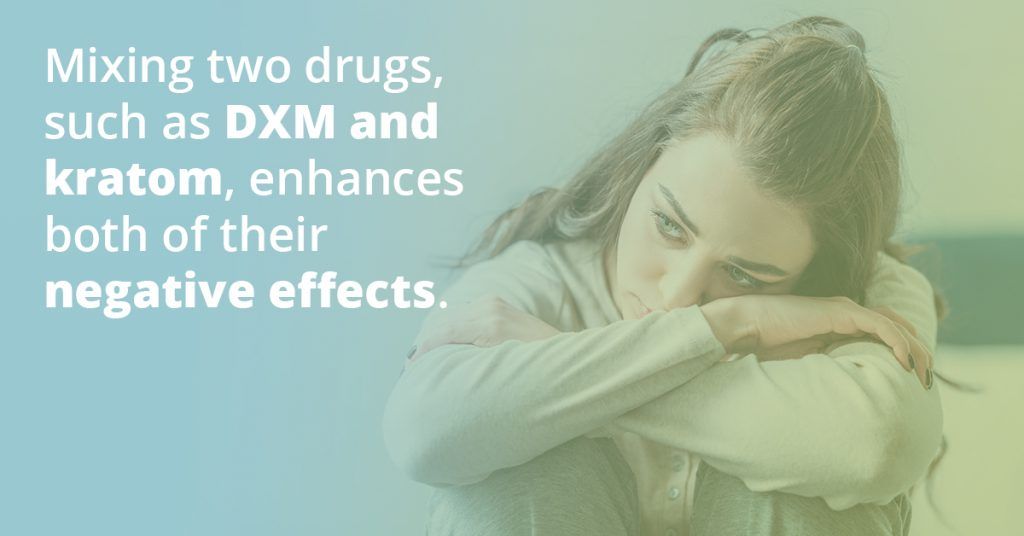 Drug addiction is a complex issue to treat and one that is easier to treat the earlier someone seeks help. Even if someone is in the stages of misuse and abuse, before they potentially reach severe and full-blown addiction, it is a good idea to seek help. Once a person develops a dependence on substances, withdrawal is more likely and it is difficult to maintain sobriety on one’s own. At NACA, we believe that treating addiction means treating the person as whole. Often there are underlying issues that resulted in drug abuse and addiction. Identifying and treating these issues as well helps us to provide the best care and develop the best plan for life after treatment. Contact us today for help for you or a loved one.