The concept of using herbal remedies to help treat a plethora of ailments goes back thousands of years. However, kava has become more popular and well-known in recent years. Though kava is a legal substance in the U.S., it comes with an array of side effects and risks of abuse.

Kava is a plant native to the South Pacific Islands. Its scientific name is Piper methysticum. Among its original users, the plant was used to create a ceremonial drink due to its psychoactive and euphoriant properties. In recent years, kava has been used as a muscle relaxant, stress reliever, pain reliever, and an insomnia remedy. Kava affects the brain and other parts of the central nervous system, often giving similar effects as benzodiazepines.

The evergreen shrub’s roots are ground up and mixed with water. This helps extract the active ingredient in the roots, kavalactones. These kavalactones only account for a small portion of the plant, however, they are very powerful. Similar to other substances, it is known that kava affects neurotransmitters, stimulating dopamine in the brain. 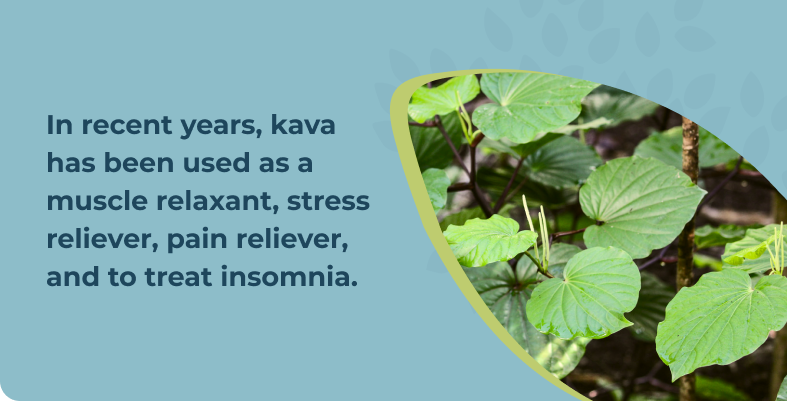 Does Kava Get You High?

While kava doesn’t necessarily give you a high, its effects can be quite powerful. The mood-boosting and calming effects of the substance is what makes it so desirable for users. The bitter, earthy beverage can be found in kava bars across the U.S. It has psychoactive effects, but unlike alcohol, it does not commonly cause severe impairment. However, its effects are completely unique for each person and are dependent on the strain, quality, and personal tolerance.

A doctor should always be consulted prior to taking a new supplement, especially if you are already taking medications. There are negative interactions that can take place between the active ingredients in kava and prescription medications. In small doses and short-term use, there are not too many consequential side effects. However, long-term use does not come without its safety concerns.

Most research surrounding kava has been framed around anxiety relief. Anxiety disorders are among the most common psychiatric disorders experienced today. In such studies, it was found that kava was successful in reducing anxiety, without the tolerance problems common with anxiety medications such as tricyclics and benzodiazepines.

Reports of liver damage and liver failure are among the serious consequences of kava use. Such occurrences led to several countries such as France, Canada, Germany, and the U.K. banning the supplement completely. It was in 2007 that the World Health Organization reported a link between liver-related death and kava use. However, it was not fully determined whether or not the substances used to extract the active ingredient or the chemicals used to extract the kavalactones from the plant.

Any substance taken in a higher dosage than directed or mixed with other drugs or alcohol constitutes abuse. It is not uncommon that kava is taken in high doses and mixed with alcohol to intensify its calming, euphoric effects. This can lead to continued liver damage or impairment.

Regardless, the potential health consequences of the supplement can be unpredictable. Some companies use harmful parts of the kava plant when producing a consumable product to save themselves money. It is nearly impossible for the consumer to determine the quality of their product.

In addition to serious liver damage, other side effects of the substance include:

Should You Consume Kava?

Though kava has been reported to be helpful for some users, its potentially fatal consequences may not weigh out the benefits. Though kava isn’t necessarily physically addictive, it certainly can be mentally addictive. Like any psychoactive substance, a dependence to its effects can develop. Self-medicating is only a temporary fix to bigger personal issues. This is especially likely when kava is being used to treat severe anxiety or other disorders.

Some possible signs of kava addiction may include:

As previously mentioned, it is crucial to consult a doctor before using kava. Though kava is marketed as a safe and effective natural supplement in the U.S., it still has its risks and potential to be abused. Here at the Northern Arizona Center for Addiction, our team is backed with knowledgeable professionals to guide our clients toward quality mental health care and addiction recovery. We are here to help answer your questions and provide you with the community and connections you deserve.

Let’s get to the root of things, together. Contact us to request a consultation.