Valium is the brand name for a drug called diazepam. It belongs to a class of substances known as benzodiazepines, or benzos. When taken, benzos influence receptors in the brain that facilitate communication between the brain, nervous system, and body.

While the effect of Valium and other benzos can be valuable for doctors when treating patients with anxiety disorders, others may seek to use the substance only to experience the calming effect. Additionally, the substance can be habit-forming, so doctors usually only prescribe it for roughly one month. When taken without care or a prescription, Valium may be habit-forming, or even addictive.

What Type of Drug is Valium?

Valium is one of many types of benzos. Many substances that fit under this category, but all of them have similar medical applications. In general, benzos calm the brain’s communication systems called neurotransmitters, making them a good treatment option for disorders that cause anxiety, panic attacks, sleeping problems, or seizures.

When taken, benzos attach to receptors that send and receive signals from neurotransmitters. Effectively, they reduce the amount of communication that occurs in the brain, causing neurons to be less excited. When an overabundance of communication occurs through these receptors, individuals can experience seizures or anxiety. Since benzos counteract this, they are often the first thing doctors look to when treating such disorders in patients.

However, doctors typically avoid prescribing them for very long. Benzodiazepines, including Valium, have been known to be habit-forming when taken for long periods of time. 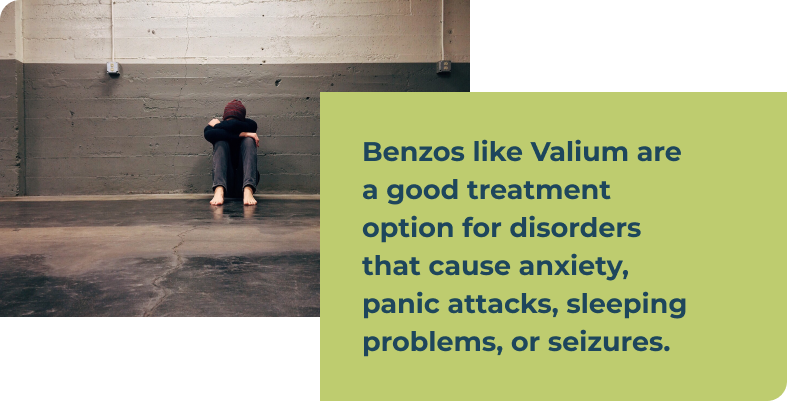 While Valium has some valuable medical applications and can be helpful for the treatment of conditions like anxiety or seizures, the substance can lead to abuse or addiction. Dependence can form even in patients who are following a prescription. However, most of the risk of diazepam comes from using it off-label or without a prescription. Without a carefully monitored dosage or a condition to be treated, abuse could develop into a Valium addiction.

The reason benzos can be addictive is the perceived positive reinforcement in your brain that occurs with a dose. The calming effect of Valium can be a desirable sensation caused by the drug, creating a cycle of dopamine release that encourages people to keep taking it.

Once someone has consciously or subconsciously started associating the positive feeling of tranquility that comes with a dose of Valium, their brain may also start releasing dopamine when taking a dose, further reinforcing the use of the drug.

In medical applications of Valium, addiction is unlikely to form. Doctors know the risks of prescribing benzos for extended periods of time, and will avoid putting patients at risk of developing a serious dependence on the drug. Most of the risk of diazepam addiction comes when someone uses it illicitly or uses someone else’s prescription to get it.

With normal use and illicit use, Valium can cause some negative side effects. The more common side effects aren’t typically too serious. They include:

More serious, life-threatening side effects may develop with extended use or abuse of Valium. Some of the more serious side effects that can occur are:

These effects aren’t exclusive to individuals who are misusing Valium, but might indicate prolonged use of the drug. Additionally, Valium addiction can cause withdrawal symptoms if someone stops using the substance or can’t get more. The symptoms of Valium withdrawal can include any of the following:

Risks of an Overdose

While uncommon, overdose can also occur with benzodiazepines. Valium is no exception. The sedative effect of Valium can be drastically increased in the event of an overdose, causing dangerously low breathing levels, heart rate, and blood pressure.

Contact emergency services right away if you think someone is experiencing an overdose of any kind. 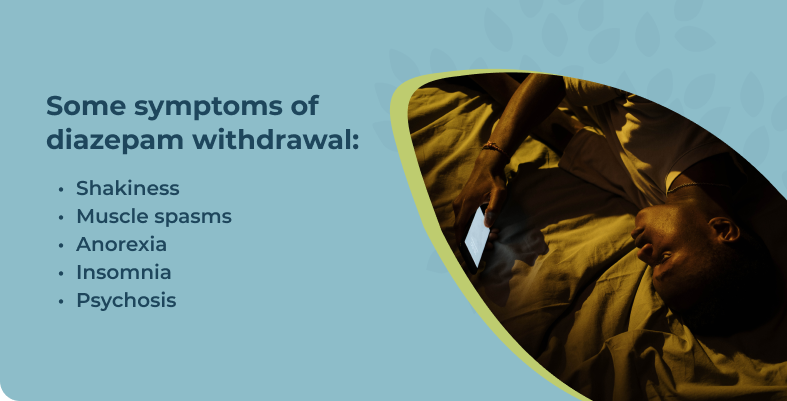 While Valium can be a valuable medication for patients who suffer from seizures or anxiety disorders, the substance can be habit-forming. It causes a significant calming sensation that may trigger a cycle of use, made worse by a boost of dopamine. The cycle can be difficult to break, and continued use can lead to unpleasant withdrawal symptoms, making it even more tough to stop. While overcoming addiction can be difficult, it’s far from impossible.

Contact us today if you think you or a loved one is suffering from a Valium addiction or another type of substance addiction. Support is available, and having access to resources might be the first valuable step on the road to lifelong recovery.