Methamphetamine – commonly referred to as just “meth” –  is a potent stimulant drug. As one of the most widely known drugs out there, there is no question that the substance has earned a reputation for being dangerous.

Unfortunately, its highly addictive potential makes it incredibly difficult to stop using, and long-term abuse often results in painful side effects, overdose, and even death.

Being aware of the signs and knowing what a meth overdose looks like can be incredibly helpful tools to potentially save someone’s life.

How Meth Interacts With The Body

“Stimulants” describe a general class of drugs that also includes familiar substances such as nicotine and caffeine.

The significant disparity in the strength and effect of the substances is what makes something like meth illegal while other, weaker stimulants (like coffee and cigarettes) can be consumed legally.

While all stimulants speed up body processes, meth causes a dangerously high increase in activity. Specific areas of the brain go into overdrive, resulting in feelings of euphoria. This is precisely the effect that individuals seek out and abuse meth for. 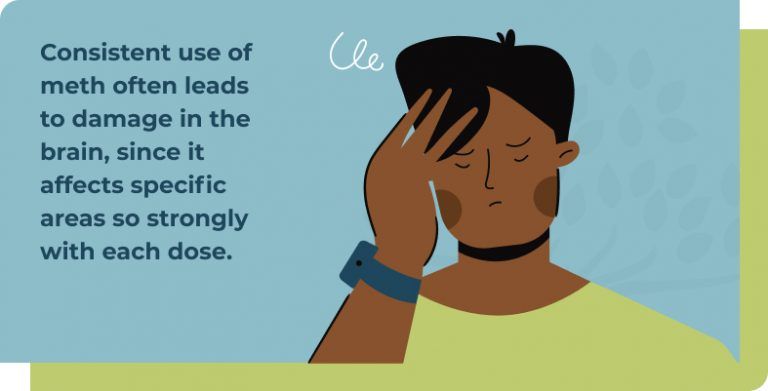 While these symptoms may not seem particularly dangerous by themselves, danger increases with continued use.

Since meth directly affects the dopamine reward centers of the brain so profoundly, it is rare for someone to avoid developing a chemical dependency upon it.

Addiction to methamphetamine can happen fast and doesn’t require much of the drug to take hold, and consistent meth use damages synapses (pathways) in the brain. Long-term or consistent use, however, can make this damage more permanent, making the road to recovery longer and more difficult.

Long-Term Complications of Meth Use

The longer a person uses meth, the more dependent the brain becomes on the substance. Because of this dependence, withdrawal symptoms also become more severe, making it near impossible for a person to quit using meth on their own 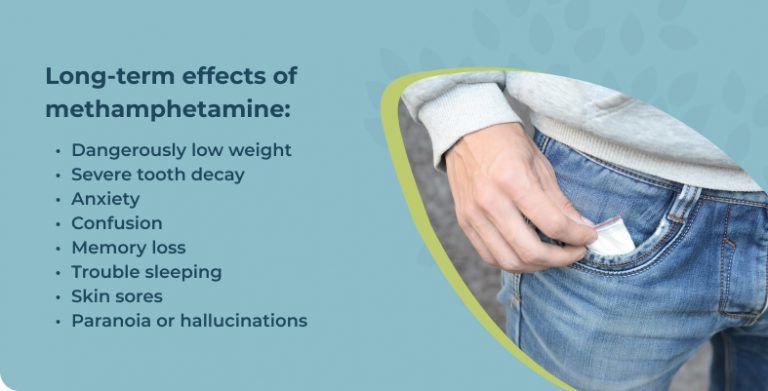 Long-term use of methamphetamine causes the brain to rewire to accommodate this new stimulus. The psychological changes in someone suffering from meth addiction takes a toll on relationships – and often results in financial issues as well.

This is why people will often report that someone in the throes of meth addiction will seem to develop an entirely different personality and upend their priorities.

Long-term meth use has some severe side effects, including:

How Meth Tolerance Leads to Overdose

Anyone who uses meth long-term runs the risk of developing a tolerance. When an individual has a tolerance for a substance, they need more of the substance to experience the same effects that a smaller dose used to produce.

Since those with a drug tolerance require larger and larger doses, the chances of that person experiencing a meth overdose increases.

Meth overdose symptoms often mirror the symptoms of a regular dose of meth, but intensify to being life-threatening. They may appear as:

Together, these symptoms can coincide to result in organ failure, heart attack, stroke, coma, or even death. While anyone could potentially experience a meth overdose with any amount at any time, individuals who suffer from a meth addiction are at especially increased risk. 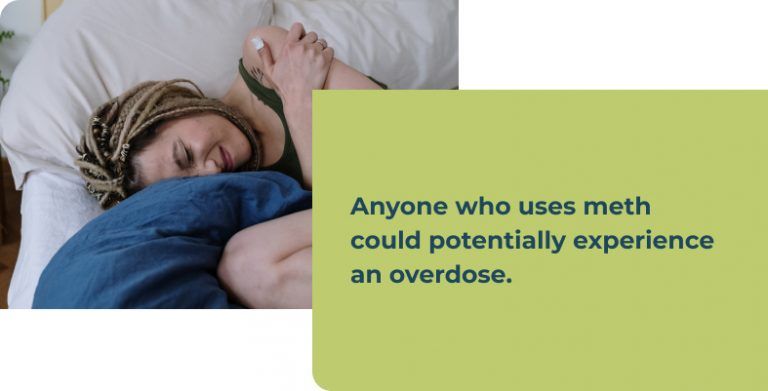 Methamphetamine’s high potential for addiction makes it a dangerous drug to take – even once. If you or a loved one is struggling with meth addiction – or any substance use disorder – contact us.

Recovering from meth overdose or a meth addiction can be a long road to recovery – but that only makes it all the more important to start today.