When it comes to substance abuse, muscle relaxers are a less common target as compared to other drugs. However, misuse and addiction to muscle relaxers is possible, so it is important to be aware of the symptoms, risks, and side effects.

Muscle relaxers are a group of drugs that primarily treat muscle pain or spasms in patients who suffer from chronic pain. Those who deal with consistent muscle spasms or are overcoming pain after a surgery may be prescribed muscle relaxants to treat their condition.

In the body, muscle relaxers typically affect the brain, spinal cord, or other parts of the nervous system, rather than muscles themselves. As medications that reduce pain, they often appear to have the same effect as other painkillers, but they generally achieve it differently, making them unique from painkillers.

Cyclobenzaprine and carisoprodol are the generic names for drugs prescribed under common brand names like Amrix, Fexmid, and Flexeril (cyclobenzaprine), and Soma, Soprodal, and Vanadom (carisoprodol).

Even though muscle relaxer addiction is uncommon, misuse of these drugs should be avoided as any drug dependence can open the door to addiction to other, more potent or even illicit substances. 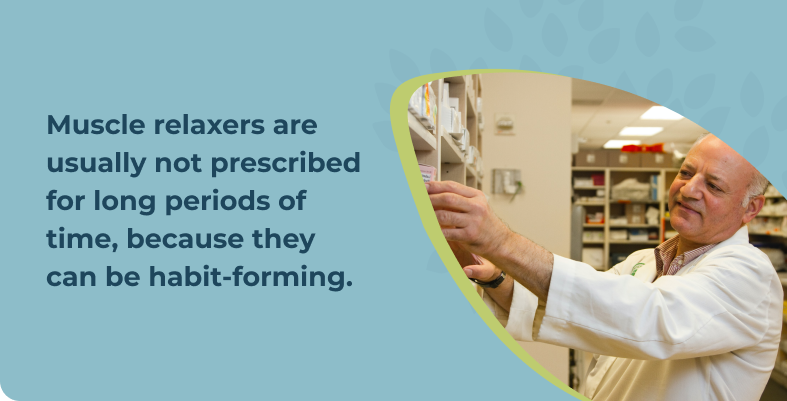 Doctors primarily prescribe cyclobenzaprine to patients who are dealing with muscle pain or spasms. Cyclobenzaprine is more commonly prescribed than carisoprodol, though a prescription only lasts for about two or three weeks.

The reasons for this are that 1) cyclobenzaprine decreases in effectiveness past that time, and 2) the substance may become habit-forming if used for longer than three weeks.

Once in the body, cyclobenzaprine affects the brain and nervous system. It acts chemically similar to antidepressants, but affects the muscles of the person rather than their mood. Cyclobenzaprine helps patients deal with sore or tender muscles, and reduces muscle spasms.

Cyclobenzaprine does not have many adverse side effects, but some might be considered uncomfortable. In general, its effects are mild:

Since cyclobenzaprine is not a controlled substance by the Drug Enforcement Administration (DEA), it may be easier to obtain than other, oft-abused drugs like antidepressants or prescription stimulants.

People may abuse cyclobenzaprine to feel its drowsy effects, or to achieve a type of high. It may also be mixed with other drugs or alcohol in an attempt to enhance the effect.

Cyclobenzaprine abuse, especially in the case of polysubstance abuse, can be risky, as it could lead to withdrawal symptoms, or even overdose. Additionally, mixing any substances together can have dangerous effects that are difficult to predict. 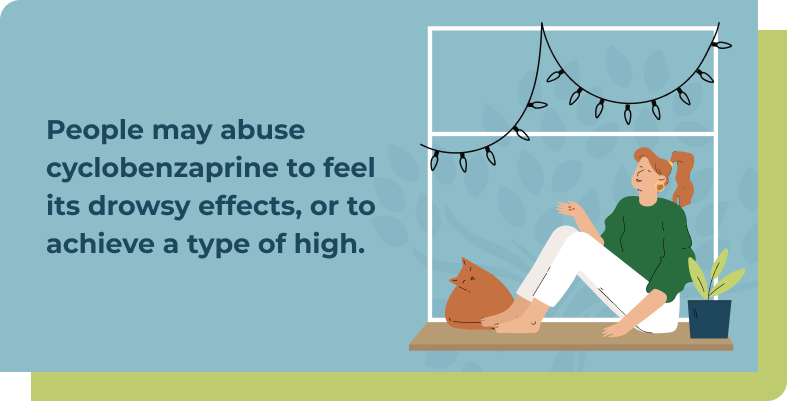 While carisoprodol is very similar to cyclobenzaprine in terms of the conditions it treats, it actually has some significant differences.

Rather than being a true muscle relaxant, carisoprodol more closely resembles drugs in the classification of tranquilizer or benzodiazepine, such as Xanax or Klonopin.

Carisoprodol is classified as a Schedule IV drug by the DEA. While this schedule communicates a low risk of abuse, it does still acknowledge that abuse can occur.

What is carisoprodol prescribed for?

As a medication, it is prescribed similarly to cyclobenzaprine in that it is approved for the treatment of painful musculoskeletal conditions, and only at a maximum length of three weeks.

It is not entirely understood how exactly carisoprodol achieves its effect of muscle pain reduction. What we do know is that it acts in the brain and nervous system rather than directly impacting muscles.

Carisoprodol does not have many side effects. Drowsiness, dizziness, headache, and low blood pressure are the main ones.

While the side effects are minimal compared to cyclobenzaprine, carisoprodol’s sedative effects make it significantly more likely for a person to develop dependence or addiction to the drug.

Those who prolong their use of carisoprodol, use it without a prescription, or have previously dealt with substance abuse, have an increased likelihood of developing a dependence on carisoprodol. 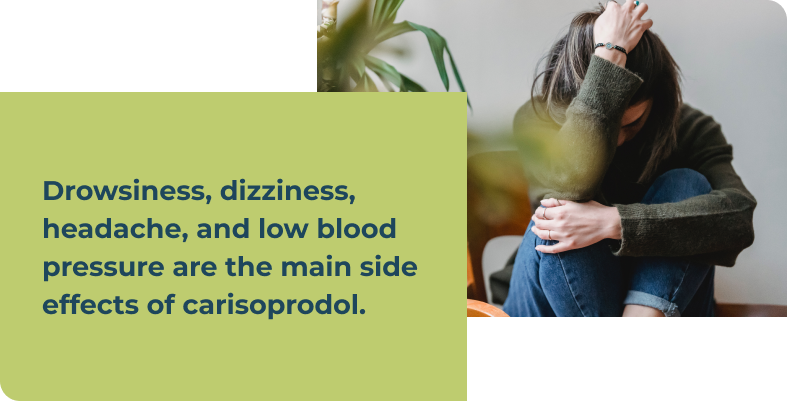 The sedative effects of muscle relaxants can make them targets for abuse by themselves or as part of a polysubstance abuse cocktail. Alone or combined, misuse of cyclobenzaprine or carisoprodol is risky, since the interactions are difficult to predict and often have unintended consequences.

If you think you or a loved one is struggling with muscle relaxer addiction or any other kind of substance abuse, contact us today. Recovery is possible, and addiction can be overcome, but it starts with making a choice to change.