Combining substances can be exceptionally dangerous. Any given mix of drugs and/or alcohol taken simultaneously has unique side effects, making symptoms unpredictable. To effectively counteract the volatile nature of polysubstance abuse, treatment needs to be precise.

What Is Polysubstance Abuse?

While many drug interactions are documented, the sheer number of different substances means that every interaction cannot be thoroughly observed and studied.

Alcohol is one of the most commonly consumed substances worldwide. It is also one of the most frequently included elements in polysubstance abuse. Alcohol, however, is notorious for interacting poorly with nearly every other drug substance available. In general, no two substances should be mixed without first consulting a doctor.

Potential Effects of Polysubstance Use

Predicting how two substances will interact is tricky. Oftentimes, medical professionals have to infer from the individual chemical makeup of each drug how they will affect the body.

Still, the physical body of the individual ingesting the substances is the biggest risk-factor for taking any drug. Pre- or currently-existing conditions that may or may not be known to the person means they may experience unexpected side effects.

Furthermore, the substances involved in SUD are not always illicit substances. Sometimes they involved prescription medication, but the repercussions can be just as dangerous.

Side Effects and Symptoms

Sometimes, individuals will combine two substances because they expect to reap the positive benefits of both, but the biology of drugs is rarely so simple. Consequently, the interaction may produce an unforeseen–if not the opposite–effect.

In addition to putting the user at a higher risk of dangerous side effects, polysubstance abuse can also be more difficult to break than a typical substance use disorder.

Because the individual develops an addiction to more than one drug, experience the withdrawal symptoms from both can be extremely unpleasant.

The treatment process for a polysubstance abuse is often as complex as the disorder itself. It therefore involves careful decisions about how to detox from the substances involved and handle their withdrawal symptoms. This process is most successful with the guidance of experienced professionals. 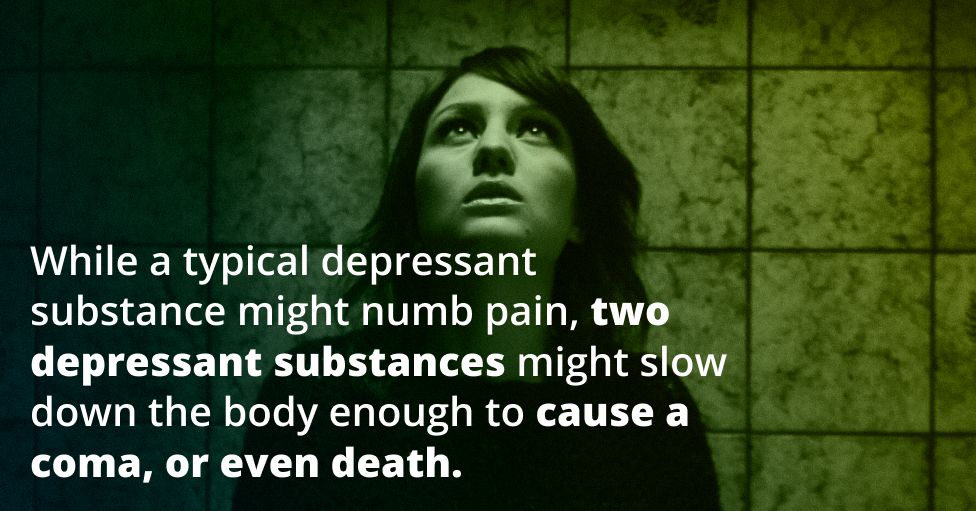 In general, some substance groups can be a particularly dangerous to mix. For instance, polysubstance abuse involving two kinds of depressants means the ‘downer’ effect that they have is magnified to a dangerous degree.

Alcohol In Polysubstance Use

As a legal and easily acquired substance, alcohol is often abused with various types of drugs. Hydrocodone, Benadryl, and Adderall are some common drugs that have known dangerous interactions with alcohol.

Hydrocodone is an opioid, so doctors prescribe it to treat pain. Unfortunately, both hydrocodone and alcohol have a high potential for abuse by themselves–together, they can be deadly. They affect the body in similar ways, and together can cause the user to stop breathing, experience a coma, or death.

Benadryl is a common allergy medication, and has a lower potential for abuse than hydrocodone. It is most often misused as a sleep aid. Since both Benadryl and alcohol can cause drowsiness, many assume the combination makes for a doubly effective sleep-inducer. While someone may initially fall asleep quickly, consuming both usually results in poor sleep quality, as well as dizziness and trouble thinking.

In comparison, Benadryl generally produces less lethal effects combined with alcohol than hydrocodone. This combination is rarely life-threatening, but can be dangerous if the individual attempts to drive while under the influence.

Adderall is a stimulant medication doctors prescribe to treat attention deficit hyperactivity disorder (ADHD). It moderates the brain activity down to normal levels in patients who have the disorder, but generally causes a rush of energy in individuals who don’t.

This “buzz” can mask the effects of alcohol when taken together. And, because the user is less able to detect the warning signs of alcohol overdose, this increases their likelihood of unconsciousness, coma, or death.

Polysubstance abuse can have unpredictable and devastating effects, and interactions are not always documented clearly. Because of this, the symptoms can be unexpected, and experiencing a combined withdrawal can be anything from unpleasant to lethal.

Overcoming an addiction is not an easy process, but it doesn’t have to be done alone. Contact us today, we’d be happy to answer your questions and help you or a loved one recover.