Fentanyl is infamous for its role in the opioid overdose crisis. Often, people take too much not even knowing that they’ve had any. It can be prescribed but is more often made and distributed illegally, then added to other illicit substances. Fentanyl overdoses can be extremely dangerous due to its clandestine nature. Here are overdose signs to watch out for.

Because fentanyl is an exceptionally strong opioid, overdoses can happen abruptly, and be life-threatening. Doctors try to avoid this as much as possible in prescription cases by limiting dose sizes and timings, but individuals who misuse fentanyl illicitly or abuse a prescription may put themselves at risk of overdose. The substance may also be mixed in with other illicit substances, making it possible to overdose on fentanyl without even knowing that it was taken.

Fentanyl, as an opioid, is a type of painkiller. People misuse it often due to its strength, and the euphoric feeling that can come with taking a dose. While it can be a valuable medication for patients recovering from surgery or dealing with immense pain, some seek it out only for the purpose of abusing it.

Compared to other substances, fentanyl is exceptionally strong. It’s as much as 100 times more powerful than morphine, and up to 50 times as strong as heroin. As such a strong substance, only a tiny dose is necessary to experience its effects, and anything more can risk an overdose. Most overdoses and deaths due to overdose often involve fentanyl or a similar substance. 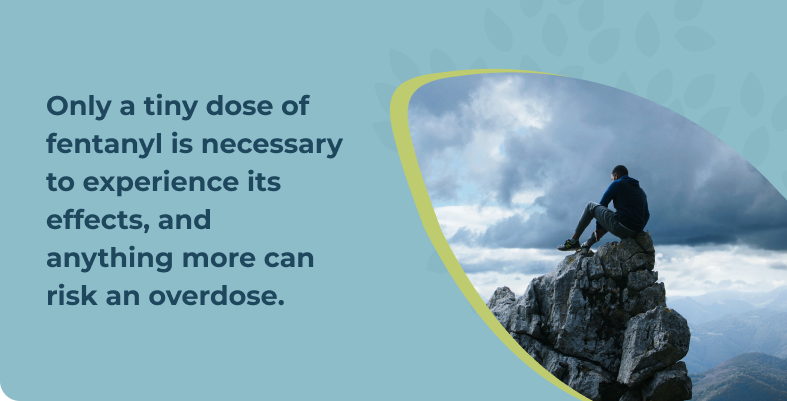 Most people don’t mean to overdose when they use a substance. An overdose occurs when someone takes too much of a substance, and receives enough of the substance to cause dangerous symptoms, or has a toxic amount of it in their body.

Overdosing on any substance usually results in highly unpleasant symptoms, and can be deadly with many strong or illicit substances. For fentanyl specifically, as little as 2 milligrams can be fatal.

For perspective, doctors usually prescribe fentanyl in dose sizes of 50 to 100 micrograms, which is about one twentieth or one tenth of a milligram. To compare, morphine is usually given as a 20 milligram dose.

With such small dose sizes, it’s easy to understand how accidental overdoses can occur. When used illicitly, it can also be tough to measure such a strong substance so carefully, adding even more risk.

When an overdose of fentanyl occurs, it involves parts of the brain and spinal cord known as opioid receptors. These receptors are what are affected by fentanyl and other opioids, and they signal the brain to block pain and release dopamine.

In an overdose, the effects are so strong that the brain stops reacting properly to carbon dioxide in the blood, causing decreased breathing. This decreased breathing is what makes fentanyl overdoses so life-threatening. It can cause brain damage, coma, or death. If you think someone is experiencing any kind of overdose, call emergency services right away.

Being able to identify the symptoms and knowing what to look for in the event of a fentanyl overdose can be life-saving. There are many potential symptoms that can result from a fentanyl overdose, but there are other signs that might help you identify if someone is experiencing an overdose.

In most instances of an overdose, the most dangerous of these effects is trouble breathing. If someone’s breathing is too shallow or stops entirely, it can deprive their brain of oxygen, leading to the danger that overdoses present. 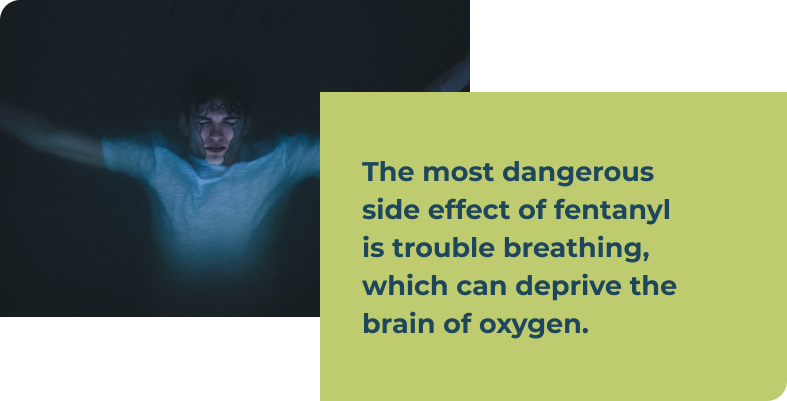 If someone is showing any sign of an overdose, call 911 immediately.

Fentanyl is a dangerous substance to misuse, and it can become even more dangerous over time. If someone mixes up a dose size, or thinks they need to try a larger dose, a change as small as a few micrograms could cause an overdose.

If you think you or a loved one is struggling with fentanyl use or another substance, contact us today. Overcoming a strong substance like fentanyl might not seem feasible, but recovery is possible. Continuing use can be dangerous, and trying to stop alone can bring about unpleasant withdrawal symptoms. Recovery starts with a single call.