The Risks of Binge Drinking (Part 2)

Binge drinking is a pattern of consuming large quantities of alcohol in a short amount of time. This usually results in a blood alcohol concentration (BAC) of .08, which means your body contains .08 grams of alcohol per deciliter of blood.

This measurement may not seem like much, however, even a BAC of .16 can be incredibly dangerous. According to the CDC, only four (4) drinks in about two hours qualifies as binge drinking for the average female while the average male qualifies at five (5) drinks.

While binge drinking is most common among young adults, people in all age ranges report participating in it–including teenagers. Furthermore, 25% of binge drinkers claim to do it at least once a week.

Why is binge drinking dangerous?

Many consider binge drinking to be a fun activity in social settings, however, it can easily get out of hand and lead to uncomfortable or painful consequences soon after or medical issues later in life.

Health risks associated with binge drinking worsen as a person’s BAC rises. Some immediate dangers of binge drinking include blacking out, passing out, and vomiting. Further, binge drinking amplifies the regular effects of alcohol, such as loss of coordination and decreased reaction time.

Even one episode of binge drinking can cause inflammation in the pancreas. Excessive alcohol use also greatly contributes to detrimental long-term health effects like liver disease, and brain damage. Some evidence suggests that it can even stop new brain cells from forming–even in adulthood. 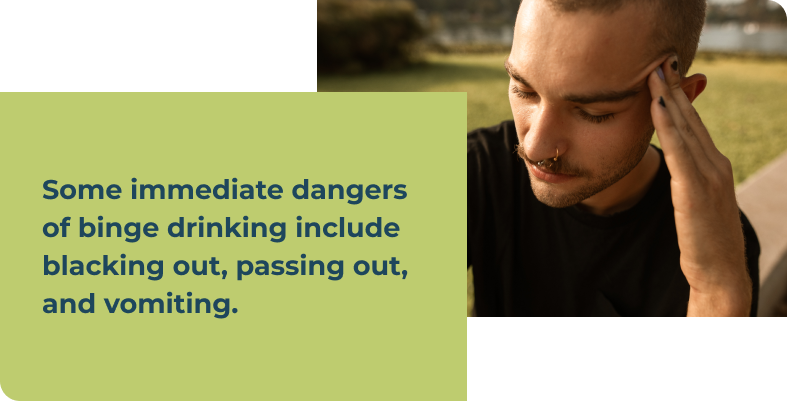 Since alcohol is a depressant, it slows down the functions of the body and the brain. Signs of alcohol poisoning are, therefore, mostly slowed functions, including:

If someone is exhibiting any signs of alcohol poisoning, do not hesitate to call 911.

Since impairment increases with more alcohol, binge drinking is responsible for a lot of questionable decisions made while under the influence. Alcohol depresses the pathways in the brain responsible for judgment, which is why someone may do something that they normally never would while sober.

This loss of judgment leads many to drive while drunk. The National Highway Transportation Safety Administration (NHTSA) reported an increase in fatal accidents involving drunk driving once the driver’s BAC hit .08. One third of all traffic fatalities in the United States involves a drunk driver. Of people who admit to drunk driving, 85% admit it happened after binge drinking. 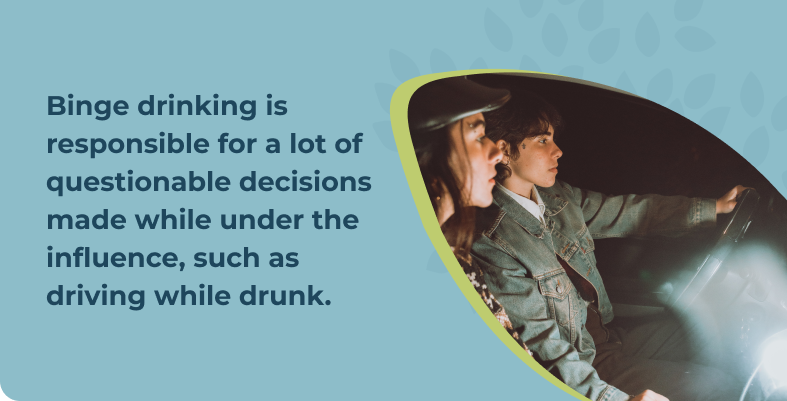 Assault and other risks

Since binge drinking is often done socially, it can increase the chance of unwanted interactions, including assault, sexual assault, and unprotected sex, to name a few. The more alcohol someone drinks, the more likely they are to be involved in risky behaviors. The CDC estimates that binge drinking costs the US $191 Million dollars in hospital bills, loss of work productivity, and criminal justice costs.

How to stop binge drinking

A bad decision, an embarrassing fall, or a dangerous brush with alcohol poisoning may be rock-bottom for someone with a binge drinking habit. For some, that is motivation enough to stop on their own or curb their drinking. But for many, it’s not that easy.

The CDC has definitions for different levels of drinking. Perhaps you’ve been binge drinking or heavily drinking without knowing that you were in alcohol misuse territory. Moderate drinking is either choosing not to drink, or consuming two drinks a day or less for men and one drink a day or less for women.

Heavy drinking is considered 14 or more drinks a week for men and eight or more for women. It is possible to drink heavily without binging to avoid some of the dangers such as alcohol poisoning. However, the long-term effects remain the same. 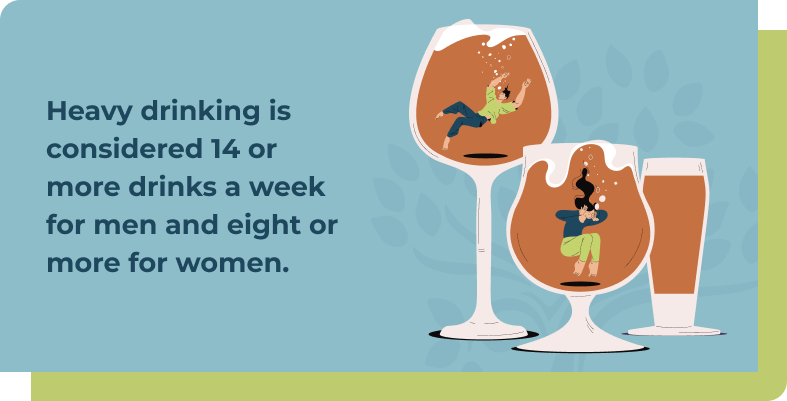 Binging and alcohol use disorder

Binge drinking is both a sign of an alcohol use disorder (AUD) and a risk factor for developing it. When someone struggles with an AUD, they cannot control their drinking.

And AUD often includes binge drinking because once a person starts drinking, it may feel difficult or even impossible to stop. Even if a binge drinker has not yet developed an AUD, they may be experiencing similar consequences such as financial struggles or decreased job performance due to alcohol consumption.

The alcohol withdrawal symptoms that follow a binge encourage a cycle of binge drinking again to make them stop. This is why people struggling with alcohol abuse need to seek professional help to ease the withdrawal process and achieve sobriety.

Getting help for binge drinking

It is never too early to reach out for help. If binge drinking has had a negative impact on your life, it’s time to consider how to cut back on drinking.

Even if you have tried and failed on your own, there are many resources that can help you finally achieve success. NACA has therapists and medical experts to treat people with all levels of drinking problems. Reach out to us and discover how we can help you find freedom from alcohol misuse or binge drinking today.