What Is Crack Cocaine?

Both are known for their stimulating effects. They produce feelings of energy, euphoria, happiness, alertness, and power.

Key Differences in Crack vs Cocaine

The key differences between crack and cocaine lie in their ingredients, production process, price, availability, effects, most common users, and possession laws.

In its powdered form, cocaine is a hydrochloride salt. It is derived from the dried leaves of the coca plant.

Thousands of years ago, the drug was first used in South America. Individuals chewed coca leaves to receive its stimulating effects. Chemists first isolated and purified cocaine hydrochloride (the stimulating chemical in the coca plant) in the early 1900s.

In the beginning processes, cocaine makers soak coca leaves in gasoline and other solvents to extract the hydrochloride salt.

It is common for additional ingredients to be mixed in with cocaine. As the drug continues to change hands, the likelihood of cocaine being diluted with other substances increases exponentially.

To increase their profits, cocaine dealers often “cut” the drugs with neutral substances such as talcum powder, flour, and cornstarch that bolster product volume. This reduces the “purity” of the substance, but allows the dealer to stretch their supply.

To cheaply mimic the effects of cocaine, drugs like amphetamine, heroin, and caffeine are also added to the powdered combination. 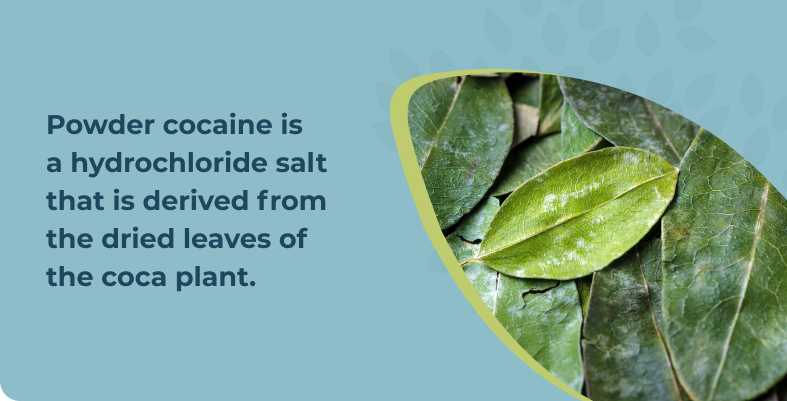 Crack emerged as a prominent substance for abuse in the 1980s. While its popularity fluctuates, it maintains its status as an object of addiction of epidemic proportions in the United States.

During production, oils, ammonia, and acids are added to cocaine hydrochloride mixtures. Baking soda is then added to the mixture prior to it being heated and crystalized. The result of this heating process is the formation of a rock-like substance.

Crack rocks are white and vary in shape and size. The name “crack'' is derived from the crackling sound produced when the substance is both heated and smoked.

With an almost identical chemical makeup to cocaine, crack carries the same harmful effects such as cardiac arrest, strokes and seizures. Crack is also loaded with other chemicals and fillers that can be incredibly toxic to the user.

Crack cocaine began to appear in urban areas between 1984 and 1985. By 1986, the drug was widely accessible, and. overall, cheaper than powder cocaine.

For around $5-$20 dollars, an individual could purchase a few rocks of crack. Between a half and full gram of powder cocaine would cost around $50-$100.

This availability and affordability of crack transformed the inner-city drug markets. Drug purchasing activity quickly spread throughout urban America. Nowadays, there is little difference in the price between crack and cocaine.

Crack vs Cocaine: Duration of Effects

Powder cocaine is typically snorted or placed onto the gums for absorption. To enter the bloodstream, it must get through skin, mucus, and other tissues.

It takes about one to three minutes for the user to begin feeling its effects. Following ingestion, the cocaine high lasts around ten to fifteen minutes.

The purity of the cocaine used and the health of the user largely determines the duration of the high it gives.

Crack is smoked with a pipe. Because this particular form of the substance immediately enters and is absorbed by the lungs, it only takes about ten to fifteen seconds for the effects to kick in.

Though the high is typically more intense than that of powder cocaine, it only lasts anywhere from five to fifteen minutes.

For both powder and crack rock forms of cocaine, some rather uncomfortable side effects follow a high. These effects can include irritability, restlessness, sleepiness, and depression that last for several days following substance use. 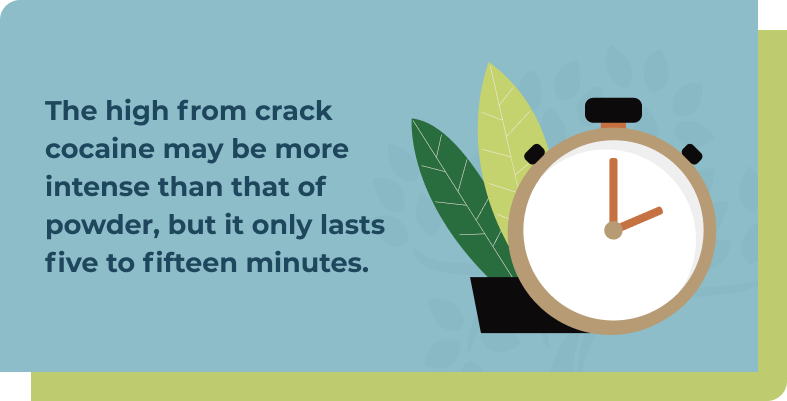 The National Drug Intelligence Center estimates that around 6,222,000 U.S. residents over the age of 12 have used crack at least once in their life.

There are many stereotypes surrounding crack cocaine, however, many of its users do not fit into them. More than 80% of those convicted for crack-related crimes were African American individuals. However, only 44% of crack users in the United States are African American.

According to an NHSDA survey, white individuals had used crack almost three times as many times as the African Americans in the survey. These findings contradict the idea that crack cocaine is solely an inner city, urban, and/or minority problem.

Misinformed stigmas and stereotypes have led to some rather unfair laws regarding crack-related punishment and crime. These laws make it difficult for people to speak up and receive help regarding their crack addictions.

As discussed above, the core differences between cocaine and crack are rather few. However, sentencing for possession of each is vastly different.

The possession of just 5 grams of crack comes with a minimum 5-year federal prison sentence. Conversely, an individual would have to be in possession of 500 grams of powder cocaine to receive the same 5-year sentencing.

This sentencing took effect when Congress passed the Anti-Drug Abuse Act of 1986, creating a 100:1 disparity between crack and powder cocaine possession penalties. 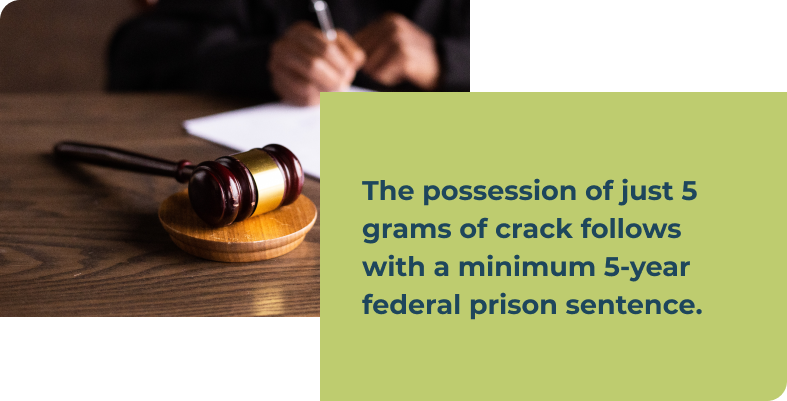 Though there were, in fact, a greater number of white cocaine users at the time, drug enforcement efforts targeted inner city communities of color when seeking to reduce the national drug use.

Following the enactment of the mandatory minimum sentencing for crack offenses, the average amount of federal drug sentences for African Americans was 49% higher than white individuals.

This led to a slew of disruptions among African American families. Parents were separated from their families, and some individuals were denied social services due to their convictions.

To address some of these problems and disparities, a Senate bill reduced the 100:1 crack vs cocaine sentencing disparity to 20:1.

Regardless of your background or current circumstances regarding addiction, help is available for you.

NACA's addiction treatment approach offers the resources and tools needed to confront substance use. Recovery is the opportunity to make the most of your life, and our programs accommodate a variety of needs and situations.

Whether the struggle is with crack cocaine or another addictive drug, reach out to us today to find help for recovering from substance abuse.